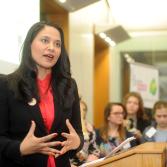 Rushanara Ali has been the Labour Member of Parliament for Bethnal Green and Bow since May 2010. She was one of the first three Muslim women, and the first person of British Bangladeshi heritage to be elected to the House of Commons. Rushanara has served on the Labour front bench as both Shadow Minister for International Development and Shadow Minister for Education. She has been a member of the Energy and Climate Change Select Committee, the Communities and Local Government Select Committee, and currently serves on the Treasury Select Committee. In April 2016 Rushanara was appointed by the Prime Minister to become the UK Trade Envoy for Bangladesh.

Before entering politics, Rushanara was Associate Director of the Young Foundation, where she co-founded UpRising, Maslaha, and the Social Innovation Exchange. Rushanara has previously worked at the Home Office, at the Foreign and Commonwealth Office, as a Research Fellow at the Institute for Public Policy Research and as Parliamentary Assistant for Oona King, former MP for Bethnal Green & Bow. Rushanara also worked as Research Assistant to Lord Young of Dartington helping him to set up the charity, Futureversity (formerly known as Tower Hamlets Summer University) and Language Line, a national telephone interpreting company.